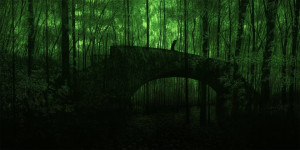 “What creepy old woods.” Buffy Summers wrapped her arms around herself and wished for something concrete, a building, a piece of sidewalk, anything that reminded her of civilization.

“Says the girl who hangs around cemeteries and kills vampires for a living,” Xander quipped, but he kept close to Buffy, Willow, and Giles. He was brave, but he was careful.

“Hey, in the cemetery, I’m in control. Out here…” Buffy shuddered. “Out here there’s too much stuff.”

Willow giggled. “These are trees, Buffy, and trees are your friends. They make oxygen, provide shade and shelter--”

“And you can make stakes out of them,” Xander finished. “Am I not right, G-Man?”

“I’ve asked you to never call me that.” Giles consulted the book he carried. It was a dusty old tome, but its weight gave him a sense of security.

“So why are we here?” Willow tipped her head back to look up at trees as they disappeared into the night sky. She twirled around once and giggled quietly. As opposed to the others, she loved being in the woods. They made her feel grounded and content.

“We are looking for something or someone, as the case might be.”

“More work for me,” Buffy muttered, then she stopped. There was a soft mewing like that of a kitten… or a… “Did anyone hear that?” She would have slapped Giles had she seen his self-satisfied smile. “I thought…”

“We have apparently found what we are looking for.” He stopped and closed the book gently. “What did you hear, Buffy?”

“That, too.” She studied the dark intently. Her senses were more acute than her friends. She saw and heard things routinely that regular people ignored. She couldn’t. She was a slayer and it was part of the package.

She started walking a bit faster down the narrow path they’d been following. Once it had been well worn, but now it was overgrown. Fragments of images flashed through her head as if she was watching seven movies all at the same time.

However, something caught her and made her stop, a sensation of such vile evil that it literally stole her breath. She gasped and barely managed to keep from doubling over.

“Buff, wait up.” Zander was out of breath from his sprint. He helped her straighten, not hating the feeling of her in his arms. Even though he knew they would never be more than friends, this was nice. “You okay?”

Giles finally caught up with the trio and looked into the distance. The bridge spanned the river, a sad thing that a person could easily jump over. In the spring, it would swell to spill over its banks, but not now. It was barely a trickle this late in the fall.

“What happened here, Giles?” she demanded.

“You are standing on the former outskirts of Sunnydale.”

“Among all these trees?” Zander was puzzled. “Where did they drive?” Willow hit him lightly in the stomach. “What?”

“We’re talking back in the 19th century, Zander. The town was facing a crisis. Several of their children were missing and they didn’t know what to do. Desperate, they turned to their spiritual leader, Elijah Farron. He insisted that a search party be formed, not where the children disappeared, but further down the river, a day’s walk, at least.”

“I have a bad feeling about this,” Willow murmured.

“Welcome to my world,” Buffy said, giving her a hug. “Again I ask, what happened, Giles?”

“Apparently the minister was the monster they sought. Finding nothing, they started back up the river, only to spot their children’s bodies floating downstream. They returned to find Farron, covering in the blood of their children, wearing their skins--”

“He said the devil made him do it.”

“Where have I heard that defense before?” Buffy made a face and looked off into the dark.

Giles handed the book to Willow and took out his pocket handkerchief. He started to polish his glasses. “The townspeople, as you might suspect, didn’t care. They took him to this bridge and lynched him, using the rope he’d used to restrain the children. It was said that the river rose up, snapped the rope and claimed him just as it had claimed the bodies of their children.”

“And?” Buffy pulled her companions closer.

“It is reputed to be the first time the Hellmouth was opened in this region.” Giles put his glasses back on. “His death was supposed to have to closed it, but I--”

“Wanted to be sure by dragging me out here under another pretense,” Buffy finished.

“Good for you, Buffy. Not fair, Giles. We could have been trick or treating tonight with our friends.”

“We have friends?” Zander was confused.

“You know what I mean. It’s the only night Buffy gets off.”

“And the only night when Sunnydale is safe to have her away from her standard duties.” Giles had assumed his Watcher’s voice.

“The cries of the children.”

“That’s so awful.” Zander ran a hand through his hair, his face visibly distressed in the moonlight. “All those kids.”

Willow’s eyes widened with realization. “I’ve heard my folks talk about this bridge. It used to be quite the hang out when they were our age.”

“Were they ever our age?” Zander tried to envision his parents as kids. He failed.

“Then something happened… um, I can’t…”

“Several local children went missing,” Giles murmured. “It was rumored that someone opened the Hellmouth.”

“That’s the mystery.” Giles took the book back and flipped it open again. “The Watcher’s Guide merely mentions that it was closed after a spiritual battle between two forces.”

“I think not. Had it been a Slayer, the book would have most certainly referenced it. Whatever it was, it was shut down permanently in this spot.”

“Then why can I still hear the babies crying?”

“I don’t know, Buffy.” Giles cleared his throat and looked off into the distance. “For what it’s worth, so can I.”

“Am I the only one who can’t?” Zander looked panic stricken. “What does it mean? Am I gonna be some kinda mass killer?”

Willow giggled and that made Buffy smile. “No, Zander, this is a Cry Baby Bridge.”

“More of a what.” Giles approached the bridge, but didn’t touch it. “A Cry Baby Bridge is one that is supposed haunted by the ghost or ghosts of a child or children.”

“I thought the theory was that the baby had to be dropped from the bridge. Like a mom not being, you know, mom-like.”

“That explains so much.” Giles again referred to his book. “There are example of children being killed near or at the base of the bridge, say in a bus crash and coming back to haunt the bridge.”

Buffy walked away from the trio and then stopped. There was a little boy standing there. His clothes were old fashioned and he seemed a bit dazed.

She squatted down. “Hi there, my name is Buffy. What’s yours?”

At first the boy seemed shocked that she was casually talking to him. “Nathanial.”

“Hello, Nathanial. Are you lost?”

“Uh huh. He said we had to stay together and he tied us up, but I runned away.”

“Nathanial, did he say why he kill… did what he did?”

“He kept talking about somebody… Lucus? No, that isn’t right. He ate babies. I wanna go home.” The child looked as if he was about to burst into tears and without thinking, Buffy gathered him into a hug.

“Shhh, it’s okay.” Buffy pulled back and Nathanial was smiling. He started glowing and she jumped back or tried to. Feeling a little light-headed, she ended up tumbling to one side. “Nathanial?” she asked as she regained her footing, but he was gone. “What just happened?”

“You are a Slayer, Buffy. You possess great strength. Apparently you gave the ghost--”

“Nathanial. His name was Nathanial,” she interrupted as she got to her feet.

“Nathanial, then, the strength to move on.”

“Oh.” Buffy smiled. “That’s all right then.” She turned and there were a dozen little children standing there. “Or maybe not.”

Buffy sighed wearily. She was exhausted, more exhausted than she could ever remember being. Just breathing was an effort. She laid back on the leaves and closed her eyes. “I’m gonna sleep for a bit.”

“Is she okay, Giles?” Willow looked from her friend to the Watcher and back.

“Yes, a good night’s or rather day’s sleep and she will be fine.” He smiled paternally. “She’s put in quite a night’s work.”

“Good thing it’s Sunday or she’s be in a fix. How we gonna get her home?”

“Yes, well, things work out for the best.” Giles attempted to gather Buffy up and grunted. “My word. She’s all muscle.”

They turned and Zander’s expression grew wary. Angel was standing there.

“Ah, yes, please. If you could?” Giles still didn’t trust the vampire, even if Buffy did.

“My pleasure.” He picked her up as if she was a feather. That roused Buffy and she smiled.

“This must be my reward for a good job.” She snuggled against his neck and Angel nodded.

“One of the ghosts… Nathanial. Before he moved on, he said that What’s-his-name, the preacher guy, he kept talking about Lucus or Luther or somebody. He ate babies…”

“Quite a few, actually,” Angel said.

“You don’t think he meant… no, surely not Lurconis.” Giles almost stumbled and Zander grabbed him by the elbow. “It can’t be. She must mean something else… Maybe feeds babies?’

“Oh, yeah, I’m sure there are tons on demons that feed babies,” Willow said sarcastically.

As they walked away, one spirit watched them, angry and resentful. This hadn’t played out as he intended. Just one more child and the Slayer would have been his. You just couldn't get good help these days. Well, there was always next Halloween. He could smell dawn in the air. Sunrise would be coming soon. Now a thin wisp of mist, he rested on the ground and waited. That was nice thing about being immortal. You had all the time in the world.